Some things I wish I’d known before running a sidescreen TR.

Mechanic skills needed to make sense of this page = Zero.

Any time you take anything apart, take photos of that area of the car at each stage of disassembly. This will aid with reassembly, as you have a record of how things looked when they were in place, and if you find after reassembly that there’s now a ‘spare’ washer or bolt, your photos might well reveal where you’ve made your mistake.
And while were talking about washers, be aware these are not negligible and totally uncomplicated things. A washer usually performs the function of bedding-in the contact between the nut and the part being secured, by physically deforming under the force applied by the spanner wielding human. You might want to bear that in mind if you’re thinking about reusing a battered old washer!
I never put 95 grade petrol in, I always use at least 97 grade. Shell V-Power is 99 grade, I use that if I can. If it’s a hot day, and the engine is already hot, I can’t start the car if there’s 95 grade petrol in there, but I can start it with 97 or higher grade just fine. (As far as I can tell, the cause of these 95 grade non-starts is vapour lock. And FWIW these mysterious numbers 95 to 99 are the “Research Octane Number” values of the various grades of petrol you buy at the pumps.)
Your engine’s cylinder head possibly/probably ought to be modified with hardened valve seats, lest the modern unleaded petrol we now use should cause the valves seats to wear out. With some of these cars, the old valve seats will last for many thousands of miles, on other cars, they won’t, and it isn’t easy for noobs like us to predict how long you’ve got. If you’re going to get this work done, make sure you go to a good mechanic who knows these sidescreen TR engines well.
As the pic below shows, the low-profile jack (blue) is set a bit lower than the standard issue jack (orange) and this low elevation makes it possible to use a block of timber to protect the TR chassis when lifting the car up. The standard jack is set too high for such subtleties. If you’re wanting to get a jack, a good quality low-profile jack is worth considering. And before you go anywhere near any jack, make sure you know how to safely use a jack and axle stands. 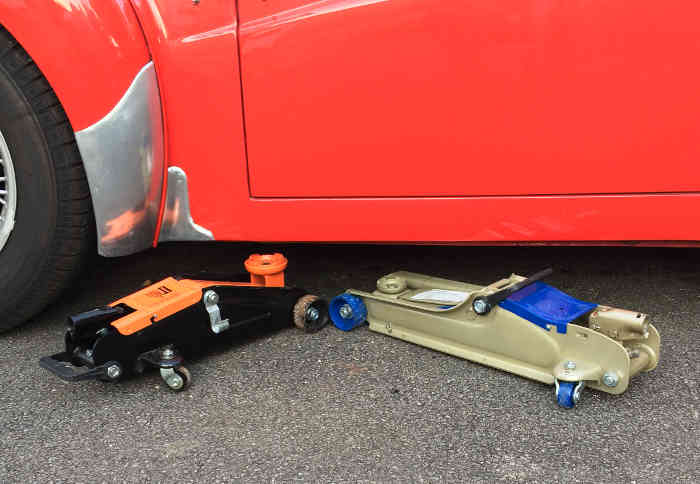 Where to find stuff out.

If you want to learn a bit about how these old TRs work, you should definitely join the TR Register and its online forum where TR heroes such as John, Bob, Stuart, Peter and many others like them post regularly, and you can get the benefit of their wisdoms without having to put up with millions of horrid javascript adverts popping up all over your computer screen.